Roadtrips: From the Opale coast to the Bay of Somme

This 5-day trip starts at our Lille Hauts de France rental agency. From here you will travel through two great French heritage sites; these are exceptional places that are preserved by the state. This prestigious label, you will soon discover, guarantees that the sites you see are truly extraordinary. You will spend 5 enchanted days driving through the sumptuous countryside from the Nord pas de Calais to the Somme in your customised van! Given full marks on our website blog for a chilled out road trip…

From the Opale coast to the Bay of Somme

When you arrive in the small village of Escalles to go up to the Cap Blanc Nez or the village of Gris Nez (and the Cape of the same name), you are struck by the immensity and beauty of the place. Cliffs over 100 metres high, beaches as far as the eye can see, the two capes even offer, on a clear day, a panorama of the English coast!

Many walks can be planned from the typical villages of the Opal Coast and on the GR paths that criss-cross the cliffs.

A little further on, Wimereux is a seaside resort with a pretty seafront, with a large seawall, and houses and buildings dating from the “belle époque” (end of the 19th, beginning of the 20th century). Typically English, it will seduce you with its large beach where you can practice PADDLE SURF, LONGE CÔTE (This activity consists simply in walking in the water with a paddle, the current of the tides will do the rest), or KITE SURF, and PARAPENTE and superb horse rides with in bonus of superb sunsets.

Further south, discover the village of Audresselles, which is as a coastal village must have been 100 years ago. With its small fishermen’s houses and white longères with coloured bands at the bottom of the walls, this small fishing village has retained its characteristic architecture while preserving its wild and natural character.

The lobster and the crab of Audresselles will delight the most gourmands!

In Escalles, at the foot of the Cap Blanc nez on the parking area! (20M from the beach)

North of Wimereux on the parking area of the Wibert Meadow, facing the harbour of Boulogne Sur Mer

Not to be missed: the majestic Fort d’Ambleureuse (built in the 17th century by Vauban under the orders of Louis XIV) which still watches over the beach as well as the Slack bay, whose flora is so particular.

At high tide the Fort is surrounded by the sea, and on stormy days it is literally besieged and attacked by powerful waves which explode on its sides in impressive sprays of foam.

Just as bucolic, the wild dunes are open to you for lunar walks, cut off from civilisation, in the natural park of the “Opal Capes and Marshes”.

From the 1930s, which shaped its identity, the resort of Le Touquet-Paris-Plage has retained all the elegance and a certain taste for the art of living. In addition to shopping in Le Touquet, you can enjoy all sorts of activities for young and old: traditional wooden horse riding school, Aqualud (water activity park for children), 6 beach clubs, Rosalie (multi-passenger bikes) and Seqway / Gyropode rental to explore the town.

The resort has been awarded the “Famille Plus” label, which means that tribes are given a special welcome.

The good thing about Le Touquet Paris Plage is that you can have lunch on the sand at any time of the year. And in the summer, many activities are organised: sandcastle competitions, sand yacht races, polo tournaments, Wakeparc.

A short distance from Le Touquet you can also visit the village of Hardelot and the castle of Hardelot Neufchatel. A symbol of the Entente Cordiale before 1914, this completely restored castle can be visited.
It is also the venue for many cultural events throughout the year!

Montreuil-sur-Mer is a fortified town, located about ten kilometres inland. It was made famous by Victor Hugo’s novel Les Misérables. This small town is indeed one of the places that served as a backdrop to this story!
However, don’t be fooled, there is no need to look for the sea in Montreuil-sur-Mer, because there isn’t any… The name comes from the fact that several centuries ago, the river Canche, which runs alongside Montreuil-sur-Mer, was much wider than it is today. It allowed ships to pass, making Montreuil a river port at that time!
Another particularity of Montreuil is its fortified side: this small town is indeed surrounded by ramparts. You can walk around them as they are perfectly preserved. They go almost all around the town (about 3km).
Montreuil sur Mer is also a destination to be savoured. It is a well-kept secret for the inhabitants of Montreuil. A mystery revealed to the many tourists who come to discover our territory. Only today, the secret has spread: Montreuil-sur-Mer embodies a certain vision of happiness…
Exciting history, idyllic landscapes, hiking and sensational gastronomy have been the reason for the tranquillity of the destination, so much so that the media have taken hold of the phenomenon. And the pleasures of the mouth are an integral part of the local well-being. This city of more than two thousand inhabitants has an extraordinary potential: cheese shops, restaurants, bakeries, chocolate shops, butchers, caterers, greengrocers… Montreuil is a gourmet destination, and whatever your budget, you can eat well here.

The Baie de Somme is renowned as one of the most beautiful bays in the world. It is the largest estuary in France and this wetland is home to a wonderful variety of birds and seal colonies.

For nature lovers, the Bay of the Somme will fascinate you with its many landscapes. Dunes, mudflats, marshes, pebble beaches and gigantic cliffs follow one another in a small area.
This richness is also reflected in the biodiversity of the fauna and flora.
This is the kingdom of birds, which have long found in the various ecosystems of the bay havens of peace to rest during their migration or to nest in the shelter of indiscreet eyes (or almost). Seals have also found a cosy home here. So much so that it is in the Bay of the Somme that the largest colony of sea seals in France can be found.

Nestled above the sea, Varengeville-sur-Mer is an amazing place where nature is generous.
Located a few kilometres from Dieppe, on the Côte d’Albâtre, Varengeville is a village full of treasures. Between countryside and sea, the landscape is unexpected. Here, trees, plants and flowers flourish. A feast for the eyes! The Parc du Bois des Moutiers, one of the three most visited gardens in France, is home to a large collection of giant rhododendrons… The Shamrock garden has the largest collection of Horthensias in the world.
Literature, music, painting, the list of artists who came to be inspired in this village is long… André Breton who wrote the first two parts of Nadja and Louis Aragon met at the Manoir d’ANGO in 1927. Prévert and Proust were also seduced. The musicians Ravel and Satie also found inspiration here. But Varengeville-sur-Mer especially attracted painters such as Turner, Whistler, Corot and Renoir. Claude Monet made the church of Saint-Valéry known throughout the world with an impressive series of paintings. Miró, dazzled by the starry nights, painted several works in the “Constellations” series.
The charm of the village is undoubtedly its church and its marine cemetery. At the top of the cliff, this place offers a breathtaking view of the Bay of Dieppe. Emblematic and unusual, the marine cemetery welcomes visitors from all over the world. Inside the church, Georges Braque’s stained glass window is accessible to all. Symbolising the Tree of Jesse, it is one of the most beautiful treasures of Varengeville. 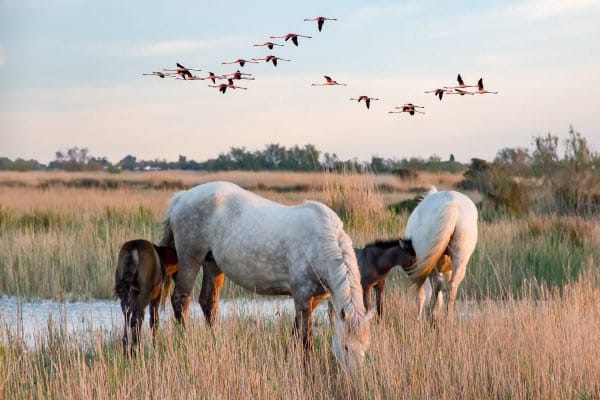 Customised van trip to the heart of the Camargue

A 3-day trip through the Camargue, an amazing mix of wilderness and sea. This is a place that wild horses and pink flamigoes call home. The Camargue provides the perfect setting to kick back, stare at the sea and chill out!
READ MORE

A week in the Pyrenean parks

Discover the Pyrenean nature reserves: the regional parks of the Ariège and the one in Aiguestortes i Estany de Sant Maurici.
READ MORE 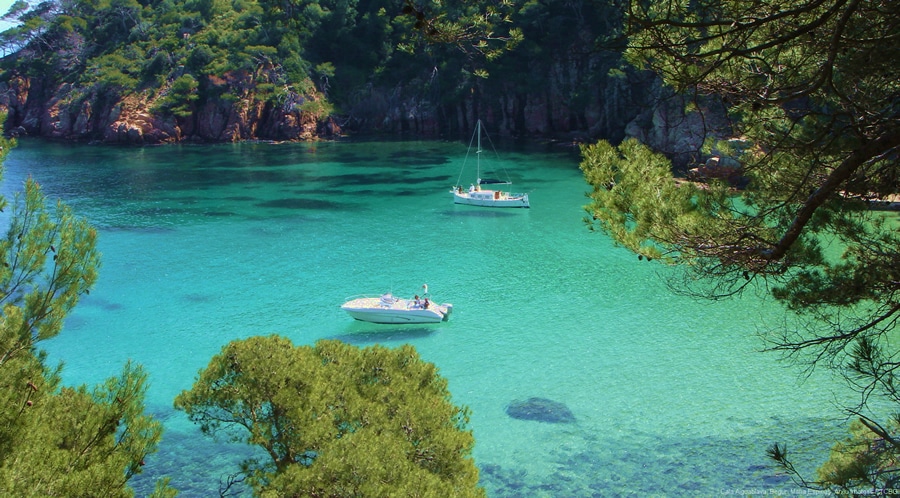 Weekend on the Costa Brava – from Begur to Tossa…

Weekend road trip on the magnificent Costa Brava from Begur to Tossa de Mar
READ MORE
NEWSLETTER
Sign up to our newsletter to not miss any news from Van-Away!
Join the network
Become a partner